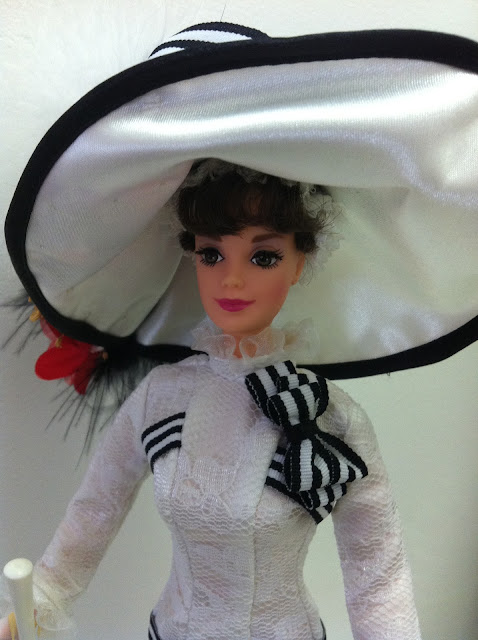 This Barbie as Eliza Dolittle from the 1964 film My Fair Lady is beautifully recreated by Mattel. Professor Henry Higgins and Colonel Hugh Pickering had decided that Eliza was ready to venture into "society"﻿ and is talking about her dress for the races at Ascot:

~ I'll bet you that damned gown doesn't fit.
~ I warned you about these French designers. We should've gone to an English shop. They would've been on our side. 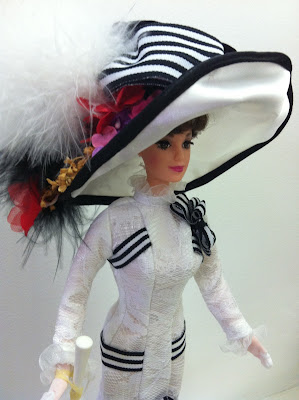 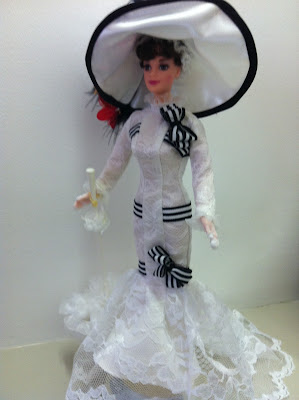 Barbie has brown eyes and rooted eyelashes. Barbie wears a slim fitted white lace gown (which I found a little coarse) with a lace train which flares elegantly at her feet. Her dress is embellished with black and white ribbons, and her neckline and cuffs are trimmed with white organza ruffles. She wears a dramatic black trimmed, white satin hat adorned with ribbons, flowers and marabou feathers. Her brown hair is tucked in a lace cap attached to her hat.  Barbie wears sheer wrist length gloves, carries a lace parasol and wears white high heels.

Despite having the countenance of a lady of fine breeding, Eliza loses herself in the excitement of the race by shouting: Come on, Dover! Move your bloomin' arse! Well, the woman was highly spirited and certainly was the life of the party!